Get Laid Blog » How To Talk To Girls 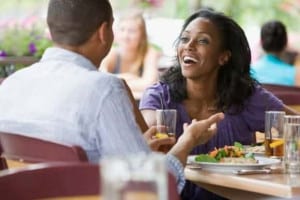 This post is about how to talk to girls – how to have a conversation that they will find interesting, fun and enjoyable. This is how to easily start building rapport and attraction.

Could you use a few tips on how to talk to girls?

You can – whether you realize it or not.

But before we get into all of that, I want to say that this:

It is important that you be ready to lead the conversation.

Once you approach a girl, you have to start the ball rolling, and then keep it rolling until the girl is invested in the conversation.

Doing that takes all of the pressure off of her, and it’s the best way to approach local girls for dating.

It makes it easy for her to be in the conversation.
There’s more to it than that – it will come back up later.

And this doesn’t even take into account the ways in which women test men to see if they want to have a relationship with them.

How To Talk To Girls: Scenario 1

Me: “Have you seen Derek Fisher on Dancing With The Stars?”

He: “Yeah, I didn’t know he had that much talent off the court.”

Her: “Did you see Derek Fisher on Dancing With The Stars?”

She: “I did! His costume was great, and the way he dipped Sharna was amazing!” “Carrie Ann and Len almost got into an argument about…”

The guys and the girls were basically talking about the same thing, but it could have been like discussing Christmas versus solar energy.

Girl #1 asks a question, girl #2 answers the question, elaborates on what happened between the principals, and talks about how it made her feel.

The women don’t just talk about the event as a matter of fact. They talk about the interaction between the people involved too. They also talk about (and feel) the emotional impact of the event. Now maybe you see why most men need a few tips for talking to women. The male brain simply does not comprehend the way women think unless there is outside intervention.

Relating An Event, or…

If you just talk to her the way you talk to a guy, and about the same things, you will bore her. If you tell her about the reason you chose a certain new computer, she’ll be looking at her watch and planning her escape.

But – if you tell her why you chose a new computer and that your best friend told you it was a stupid decision; she’s a little interested now.

If you then tell her your friend completely changed his mind after finding out it came with free subscriptions to McAfee, Netflix and Amazon Prime; now she’s enjoying the conversation.

You are injecting emotion and a backstory and creating a conversation that hooks girls!

Two things are going on and this matters in how you talk to girls:

What’s not to love – it’s like hearing a mini suspense novel on tape; and you are creating rapport.

So that’s the first of our tips for talking to women that we are going to discuss today: They want to hear about human interaction, especially if it involves emotions, drama, suspense or surprises.

They want to hear a story – that’s one of the most important tips for talking to women.

It is at the core of how women talk versus how guys talk.

But being a good story teller isn’t always easy for everybody.

Good stories rarely just pop up or pop out. It helps to have a few in mind like the example above. Write them down, practice telling them in front of a mirror a few times. When you do roll them out, they’ll have all of the elements that make it a good story. And that will make for an interesting conversation.

How To Talk To Girls – Avoiding Mistakes

another mistake that too many guys make:

They talk about things that they can’t be at least a little passionate or excited about. A lot of times when talking to women; their interest is aroused not so much by what you say – it is more about how you say it.

Talk about things that you have some feeling about. It doesn’t matter if it’s philosophy, the environment or the game last night – talk about them with feeling and excitement. Use your hands too, let your voice and your body language show that you feel it.

But keep in mind that you don’t want her to think that you are trying to impress her. You don’t want to come off as a braggart or a know it all. That would make you seem needy, conceited and desperate for her attention.

In other words – you will seem like a loser. So don’t do like a lot of guys do.
They try to think about interesting things to say. Guys rack their brains trying to come up with something that will interest the girl. We, by nature; want to say things that will impress the girl.

Don’t do it – at this point, just talk about things that you find interesting, but make them interesting to her by describing the people involved and their interactions.

Do it with some excitement or emotion:

Describe the dynamics of the relationships within the story.

When it comes to tips on how to talk to girls, you will never hear one more important than that.

Like I said before – it’s not the action that makes the story interesting – it’s the relationship between the actors. Now if she shifts the topic to any particular subject – draw her out on it. Obviously, it is something that she finds interesting, so ask her:

Questions like that will give her a chance to do some of the conversational lifting while you mainly listen. They will also have her getting emotionally and intellectually invested in you and in the conversation that you have been leading. And for backup topics, keep these things in mind:

Why So Many Questions?

Asking simple questions that have short, simple answers needs to be a rarity when you’re talking to women you’ve just met. Any question that she can answer with just a few words or less, and which doesn’t open the door to more questions, will not cause her to become emotionally invested in the conversation.

Bonus tip for talking to women:

When you do ask “short answer questions”; follow them with questions like, “What do you think about that? Or ask, “How does that make you feel?”. Get her emotional buy-in to the conversation because that will make it more interesting to her.

The main thing is that you don’t want to just ask her short questions like “what kind of work do you do?” That’s a fine question to start with, but don’t stop with that. Follow it with more questions that drill down and show interest, like:

I think you get the idea.

How To Talk To Girls – Final Thoughts

The main take away here is this:

Don’t just talk about different things – tell her stories that she will relate to. And make sure that there are two or more people interacting in those stories. If the event really only involves one person – describe the way that person was thinking and feeling during the situation.

Share what’s happening in the relationship between those people. Don’t just tell her about buying a new car, but tell her how your friends and co-workers gave you advice about it. Tell her how the sales guy approached you and impressed you. Mention the smell of the leather seats the first time you sat in it. Talk about your interactions with people along the way to buying that new car, because she will find that interesting. Additionally, she will find you attractive and interesting by extension.